The homofascist behind WikiLeaks. 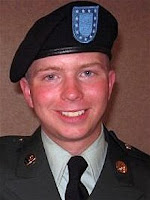 This is the gay man who leaked much of the classified information to WikiLeaks. His motivation was his rebellion against DADT. This fact is ignored by the mainstream media although his treasonous actions were a direct result of his homosexuality.

Private Bradley Manning apparently cares more about pushing homosexuality into the United States Military than the lives that will be lost due to his betrayal of classified documents. Story here.
Posted by Mantronikk at 2:50 PM