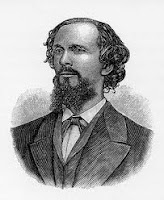 ...that the law should protect young boys from homosexual men and prevent gay men from committing lewd acts in public.

I stumbled upon this info yesterday as I was researching and writing a chapter in my book on heteroseparatism, and I was stunned. This guy, Karl Heinrich Ulrichs lived from 1825 to 1895, and he is known as the original founder of the modern gay rights movement. He was the first known, out-of-the-closet homosexual in modern history, and he wrote various books and articles on the subject of the rights of gay people. This guy was "gay" before the word "homosexual" even existed.

What stunned me yesterday, while I was writing, is the fact that Mr. Ulrichs supported laws that protected young boys from the "seduction" of gay men! (perhaps because of his homosexual contact with his riding instructor when he was 14) OMG! Do modern homosexual know this? Do modern gays know that they have deviated from the originator of the gay rights movement when they chase after underage boys, threaten those who don't support their homofascism, and commit lewd acts in public during "gay pride" events/parades? My supporting info is here.
Posted by Mantronikk at 4:20 PM