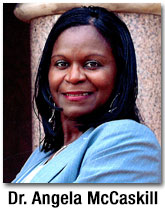 The marriage-redefinition-bigots are at it again with their, support- same-sex -“marriage”-or-else mindset. What happened to this world? How did people develop the desire to punish those of us who believe in God’s, one-man-one-woman definition of marriage? Compassion for gays means ignoring what God says? This is why, in my private life, I have no conversation for marriage redefiners.

“..Dr. Angela McCaskill has the distinction of being the first deaf black woman to receive a PhD from Gallaudet University, …teacher, administrator and leader for twenty-three years.

Today she was summarily put on administrative leave while university officials "determine her future" at Gallaudet. Why? Because it was brought to their attention that she signed the petition to allow the people of Maryland to vote on same-sex marriage!


No one is safe when marriage is redefined. The architects of same-sex marriage are bent on silencing and firing those who oppose their agenda. The irony of a university putting its own chief diversity officer on leave—a woman who by all accounts has served the institution with distinction for over two decades—simply because she chose to exercise her rights as a citizen, cannot be ignored. …”

Posted by Mantronikk at 1:41 PM