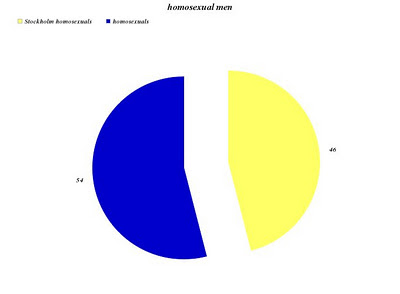 When I was writing my Heteroseparatist's Manifesto and I was categorizing the types of gay men, I was very sure that the Stockholm homosexual was going to be listed/named first. When I was young, the first two gay men I knew well, told me how they became gay. Their seduction into the glbt community by an older homosexual was the common thread in each case. My later investigations to write a strong and relevant manifesto only supported this finding.
"...The Archives of Sexual Behavior: “One of the most salient findings was that 46% of the homosexual men in contrast to 7% of the heterosexual men reported homosexual molestation. 22% of lesbian women in contrast to 1% of heterosexual women reported homosexual molestation." (Marie, E. Tomeo “Comparative Data of Childhood and Adolescent Molestation in Heterosexual and Homosexual Persons.” Archives of Sexual Behavior 30 (2001): 539)..."
The saddest thing about the gay life is that the young victim of same-sex, sexual molestation has been deceived into believing that they were receiving love when they were, in fact, being used for sex. From what I've observed, people that continue on in the glbt lifestyle after hearing the Truth, simply don't want to face the fact that what was done to them was NOT an act of love, but was a evil, perverted, sexual seduction.
This is why I don't hate gay men, but go out of my way to shine the light of truth on those who approach children concerning sexual matters without parental consent. If gays were born and not made, some in the glbt community wouldn't be so desperate to bypass parental consent in "anti-bullying" classes that encourage children into the glbt community.
My supporting info is here.
Posted by Mantronikk at 9:42 AM