The glbt and feminist war on masculinity. 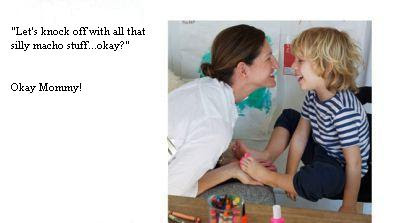 There is a definite link between women who are uncomfortable with strong independent men, and how a boy develops into a homosexual.
When a boy is born to a woman who is full of anger towards men, in many instances, the woman removes the boy's father from his life, and raises the boy in an environment where masculinity is constantly denigrated. This creates an environment from which effeminate homosexuals develop.
Before I was married, if a woman I was dating copped an attitude when I opened a door for her, or if she forbade her son from playing with toy guns, I quietly faded from that woman's life. Having worked with arch-feminists for eight years, I developed effective tactics to deal with feminist contempt.

“...What it says is that my worry that Ms. Lyons might be expressing her own discomfort with masculinity and projecting it onto her son—and mine, and yours—seems to have been justified.

It says that Lyons does seem to have been promulgating her perspectives on gender roles having no value.

It says that she was, indeed, apparently using J. Crew—a brand so many of our kids gravitate toward—as her launching pad for a mini-campaign to change the way our kids think about their bodies and their gender identities.

See, I don’t think it’s so terrible that boys are different than girls. I think it’s just fine, in fact, that a central supporting beam of the architecture of most boys’ senses of self is that they look like boys and act like boys and feel like boys. I don’t think that’s pathological. But I think that Jenna Lyons—and maybe J. Crew—would disagree with me. ...”

Complete article here.
Posted by Mantronikk at 6:51 AM