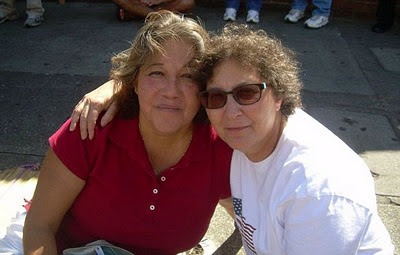 The horror of this story has rocked me to my core and caused me sorrow. I wanted to post on this story when it came out, but work and emotion have delayed me.

Lets look at the eight levels of perversion we have here... 1. Two women in a sexual relationship with each other. 2. A gay "marriage." 3. A gay "marriage" performed by a Rabbi. 4. An adoption by a homosexual couple. 5. A boy who decides that he's a girl at age 3 (I'm sure the lesbian household had no influence on the little boy!) 6. A child allowed to reject his own gender. 7. Chemicals given to a boy to block the development of his masculinity. 8. The government of Berkley, California (shocker!) allowing this child-endangering-homofascism to happen.

Now that I write it all out, I don't feel so bad about how long it took me to understand the eight-degrees-of-horror in this story. A boy is being turned into a girl by his lesbian mother. And people are supporting this child abuse.

The David Reimer case wasn't as bad as this one, and only the Jesse Dirkhising story tops the horror of this one.
Posted by Mantronikk at 10:39 AM