The truth about David Kisule. 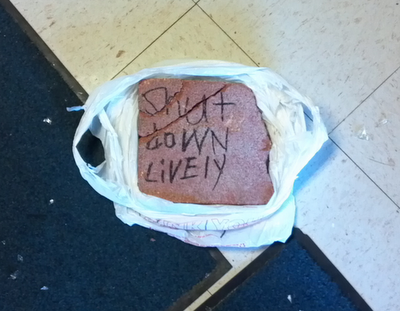 Saturday, 15 October 2011, a couple of homofacists threw two chunks of concrete through the glass doors of a place called Christian Liberty Academy, and then posted this celebratory message concerning the violation of the civil rights of Christians...

"...On January 26, 2011, Ugandan gay rights activist David Kisule was murdered after being outed in a newspaper ad that listed names and photos of queer people in the community as a part of an anti-gay campaign that is a result of Scott Lively’s visit.

These chunks of concrete were thrown through these windows and doors for two reasons: to show that there is a consequence for hatred and homophobia in our community and to directly cause this event to be shut down. If this event is not shut down, and the homophobic day trainings do not end, the Christian liberty academy will continue to be under constant attack. ..."

As usual, anti-Christ gay "activists" are living a lie. Like in the Matthew Shepard case, David Kisule was killed by a member of the glbt community, and not by "homophobes." Scott Lively had nothing to do with David Kisule's sexual encounters with Nsubuga Enock.