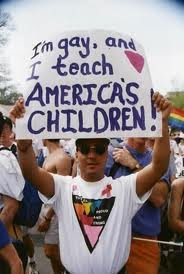 Apparently, a teacher who teaches German is, ironically, also a homofascist. And this story takes place in Texas!
"...Krause called the incident “mind blowing” and said the teacher had frequently brought homosexuality into ninth grade classroom discussions.

“There has been a history with this teacher in the class regarding homosexual topics,” Krause said. “The teacher had posted a picture of two men kissing on a wall that offended some of the students.”

Krause said the picture was posted on the teacher’s “world wall.”

“He told the students this is happening all over the world and you need to accept the fact that homosexuality is just part of our culture now,” Krause said.

The school district would not comment on why a teacher was discussing homosexuality in a ninth grade German class.

“In German class there should be no talk of being pro-Gay or homosexual topics,”..."

Story with video here.
Posted by Mantronikk at 3:18 PM