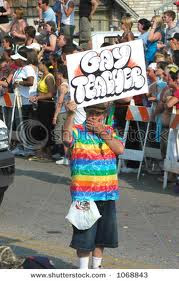 What would happen to a teacher if he was a Christian and had suspended a gay student for saying that Christianity was wrong?

“...Fort Worth, TX — Last week, high school freshman Dakota Ary was given in-school suspension for telling another student that he believes homosexuality is wrong because of his Christian faith. Western Hills High School teacher, Kristopher Franks, is responsible for his suspension and has now been placed on administrative leave with pay.
...Franks overheard the comment, wrote Dakota an infraction, and sent him to the principal’s office...
...Franks charged Dakota with “possible bullying” and indicated, “It is wrong to make such a statement in public school.”
Two weeks prior to this event, Franks displayed a picture of two men kissing on a “World Wall” and told his students that homosexuality is becoming more prevalent in the world and that they should just accept it...
...the school district reversed the in-school suspension and placed Franks on administrative leave with pay.
This teacher should not force his views about homosexuality upon students. Teachers cannot use their position to bully students and humiliate them in front of their peers.”...”
Story here.
Posted by Mantronikk at 6:25 PM