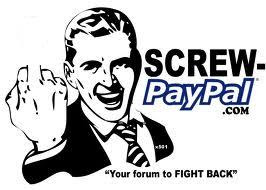 As usual, the persecution of those who don't support homosexuality grows stronger everyday. What an absurdist reality we live in! If the glbt community gets mad at you, look out! Some homosexuals will go so far as to threaten to rape your children if you speak out publicly against their behavior. Wow.

Now, unfortunately, it appears that PayPal is succumbing to homofascism.

“...Severo’s use of PayPal has been targeted in recent weeks by the homosexual group “All Out,” which has created an online petition to urge PayPal to dump Severo and nine other PayPal users as purveyors of “hate” and “extremism.” Severo’s site expresses love of homosexuals and a concern that homosexual behavior is destructive to those who participate in it.

Homosexual militants have sought to silence Severo for years, and the elimination of his PayPal account is the third major success scored in their campaign.

“I am very worried, because PayPal caved in to gay militants and their hate campaign to have me excluded from PayPal,” Severo told LifeSiteNews.

“Julio has a highly effective blog - that’s why he became a target of the Homosexual Lobby. The Left can’t answer his ideas, so they target his funding. By dropping Julio days after the launch of All Out’s “gay” propaganda campaign, PayPal joins the ranks of anti-Christian companies who have taken sides in the Culture War—against committed believers.”...”