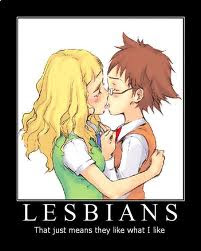 A woman named Lindsay Miller is very probably angering some (if not most of) the glbt community with her recent article on how her lesbian life is, indeed, her choice.

Although I was turned off by her use of two of the most overused and misused words in this day and age; "discrimination," and "homophobia," her article contained valuable insight into the mind of a bisexual woman who is choosing to have a romantic, sexual relationship with another woman. Her social stock/popularity must be plummeting in the gay community!

“...In direct opposition to both the mainstream gay movement and Lady Gaga, I would like to state for the record that I was not born this way. I have dated both men and women in the past, and when I've been with men, I never had to lie back and think of Megan Fox. I still notice attractive men on the street and on television. If I were terrified of the stigma associated with homosexuality, it would have been easy enough to date men exclusively and stay in the closet my whole life...”

“...The "born this way" argument is frequently used in defense of gay rights, but whether or not I deserve the same rights as straight people has nothing to do with whether I chose to be the way I am...”