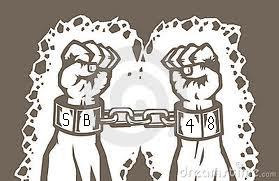 As of today, with Governor Jerry Brown's signing of SB 48 into law, a parent who has a child in the public school system in California, can NOT exclude their child from a class in which homosexuality is portrayed as a normal sexual activity.

The violation of the parental rights of those who don't support the sexual activities of the glbt community is now legal in California's public schools.

Who can deny that SB 48 violates the parental rights of those who don't support the sexual activities of the glbt community? Is there anyone out there who is so crazy that they think that this legal trampling of the civil rights of Christian, Jewish, and Muslim parents is a good thing?

Today, 14 July 2011, homofascism has been embraced by California's government. My supporting info is here. <---The 6000+ comments on this story that were 96% pro-hetero were removed by the San Francisco-based (go figure!) software company DISQUS.

(Info on home-schooling is here.)
Posted by Mantronikk at 2:07 PM