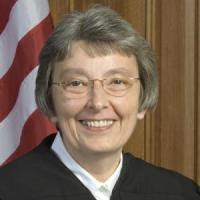 <----Lesbian Judge Barbara Lenk is off to a bad start. She wasn't even a State Supreme Court Judge for a week before lending the prestige of her office to anti-hetero activism.
"...Massachusetts Supreme Judicial Court Justice Barbara Lenk, widely heralded as the first openly "gay" judge on the state's top court, spoke at a homosexual advocacy group's fundraiser only two days after her confirmation, a move some critics are saying is a clear violation of (see page 8) judicial ethics. ..."
Posted by Mantronikk at 6:00 AM