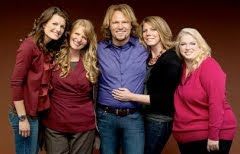 <---These people want to redefine marriage, but the glbt community won't support them. Wait...hold on a minute. Waaa? Weren't the polygamists the first social group that wanted to redefine marriage in the United States of America? Is this yet another homofascist inconsistency? A "yahi"?

"...Pro-family activists have long warned that redefining marriage to include two men or two women would inevitably lead to legalized polygamy, with polygamists employing the “equality” and “consensual” rhetoric of the gay rights movement. However, gay rights commentators immediately distanced themselves from the polygamists’ suit, with one prominent commentator calling it “a political gift to anti-gay groups nationwide.”..."