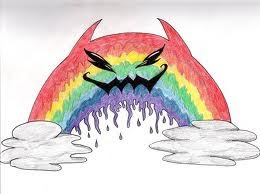 So merely supporting God's definition of marriage makes some in the glbt community want to kill and rape?

Among the documented threats:
• "I will kill you and your family."
• "Oh my God, This woman is so f---ing stupid. Someone please shoot her in the head, again and again. And again."
• "I'm going to kill the pastor."
• "If I had a gun I would have gunned you down along with each and every other supporter…"
• "We're going to kill you."
• "You're dead. Maybe not today, maybe not tomorrow, but soon … you're dead."
• "I'm a gay guy who owns guns, and he's my next target."
• "I warn you, I know how to kill, I'm an ex-special forces person."
• "Get ready for retribution all you bigots."
• Burn their f---ing churches to the ground, and then tax the charred timbers."
The evidence included churches marred by graffiti, swastikas on lawns and walls, bricks thrown through windows and doors, adhesive poured into locks, suspicious packages of white powder sent in the mail – "all for nothing more than supporting traditional marriage."
Story here.
Posted by Mantronikk at 8:59 AM